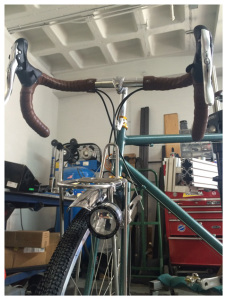 I’ve been on a break from the shop since the end of June, spending time on Vinalhaven, both riding and kayaking.  Just before leaving, I finished (well, almost finished) this touring bike for my friend Tim.  Tim loves the look of old one inch threaded stems, so this is set up with a Nitto Technomic stem, and a custom fork with 60mm of rake on a 71 degree angle to offer more clearance for racks and toes.  The frame is entirely brass fillet brazed, so it has a nice, smooth, curvy look.   I incorporated a Schmidt SON dynamo hub, internal wiring to the head and tail lights, and Berthoud fenders.  I like it so much that I’m going to build another similar one for myself, and maybe do its maiden voyage with Tim on a ride up to Rockland for the Vinalhaven Ferry.

Oh, and why Jedi?  Tim named his ride Qi-Gon Jinn, after the Jedi who mentored Obi-Wan Kenobi.