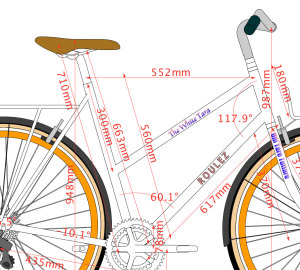 Until this winter, every frame I’ve built has been TIG-welded.  TIG welding is a relatively modern technique for bike building.  It wasn’t invented until the 1940s — it originated at Northrop Aircraft as a method for joining light metals like magnesium — and it didn’t make its way into bike building until the 1970s. Until then, from the 1800s onward, bikes were most often built using lugs, joined by brass or silver alloy brazing.  TIG, although it was designed for light metals, runs at a much higher temperature than brazing:  in the 10,000 degree Fahrenheit range, vs. about 900 degrees for silver or 1500 for brass.

This winter’s first project, though, is a step-through frame for my wife, and it’s a 1940s/50s design and it became a perfect excuse to move backwards in technology history and learn proper silver and brass brazing techniques.  While the lower temperatures make it more tolerant of newbie mistakes (TIG burns holes in steel, brazing just makes a mess), it’s not easy to get right.  Temperature control with the torch is important, good cleaning and prep is important, and there are a hundred other little sleights of hand that separate a newcomer like me from a master artisan like Brian, of Royal H cycles, who’s leading me through it.